It’s been around eight years since the power pop-punk band Tonight Alive broke onto Sydney’s underground music scene, and since then, the fivesome have released two studio albums (the third one will be released in March), have played in major festivals like Warped Tour, and have garnered a loyal fan base and global recognition.

Last week, the band landed in Spain for the first time ever as part of its new European tour, and Hot BuZz (mag) took the opportunity to interview Jenna McDougall (lead singer), and Cam Adler (bass player), just before their Barcelona show at Sala Apolo.

We talked about their new record, “Limitless”, their world tour, their future plans, and about having a healthy lifestyle, and, to our surprise, about watching Jason Statham movies.

Hot BuZz (mag): Let’s start talking about “Limitless”. So far we’ve heard four tracks from it, and it seems that you are taking a different direction. What can we expect from the new record?

Jenna: It’s very diverse. Every song we put out of before the record is completely different to each other. I think that in that way, it’s a good intersection record because every song tells a different story. The whole writing process was really about taking risks.

Cam: I think that you are gonna get different moods, you can go from one song that might be, you know, solemn, and then go straight to a song that is gonna start rocking out, and those sort of changes are gonna move really well into the live shows as well.

HB: What can you tell us about the lyrics?

Lyrics really explore finding your inner power, and whatever makes you fulfilled. I think I really had to grow up on that time we were making the record, and writing it. I had to become a strongest person. It was painful, but really rewarding.

HB: So, the lyrics on the new album reflect who you are, how you feeling at the moment…

Jenna: Absolutely! I think it’s like looking in the mirror. There is no makeup, it’s pure expression.

HB – You worked with a different producer (David Bendeth) on this record. How was the experience?

Cam: We really did a hard work, it was really challenging, He really pushed us so far out of our comfort zone to a point that it wasn’t enjoyable, but, in retrospective, now that the record is finished, all makes sense. Our relationship with him has grown a lot.

HB – Can you describe “Limitless” in one sentence?

Jenna: To describe the record… it’s a big question! The title really speaks for itself. I wanted “Limitless” to be an attitude, and a lifestyle. Embracing that idea of being limitless, and taking rules and boundaries out of your life. 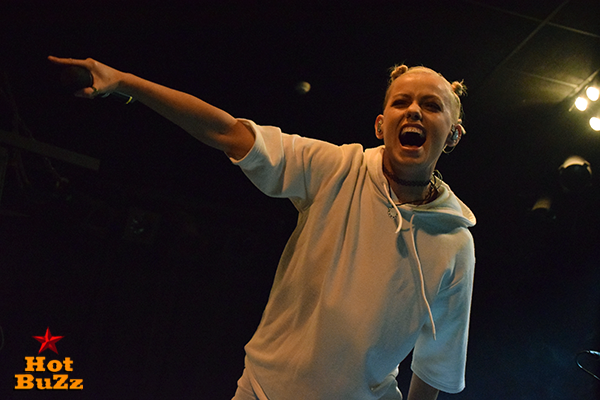 HB – How the reception of the new songs has been?

Jenna: Very mixed, but I think that is positive. We are not making music to please people. We made choices that someone may not be happy with. Sometimes, not everyone understands it, and I think that’s exciting. But I’m really excited also by the people who understand the necessity of exploring all you other needs, and being inspired by that like even it’s in the way you dress or you do your hair.

Cam: We didn’t want to write an album that was the same like what we did before. We wanted to take risks, you can’t please everybody, but we are just happy to give different emotions in the songs, and as long as we like all of them. We love all of them! (laughs).

Jenna: It was awesome. We didn’t know what to expect as we’ve never been in Spain before. We had to grow our fanbase here, but we have a lot of fans who have waited a long time to see us. Last night was exciting and fascinating. The crowd was singing louder than me.

Cam: Each person was worth two.

HB – You’ve made some covers in the past like “Little Lion Man” (Mumford and Sons) and “Killing in the Name” (Rage Against the Machine), are we going to see you play these songs in this tour?

Cam: We played the Rage Against the Machine one in Australia, but we’ve decided not to cover anything in this tour. We have some fans who have been listening since our first album, and now it’s the first time they are seeing us live, so instead of playing a cover, we thought it’d better to play older songs. 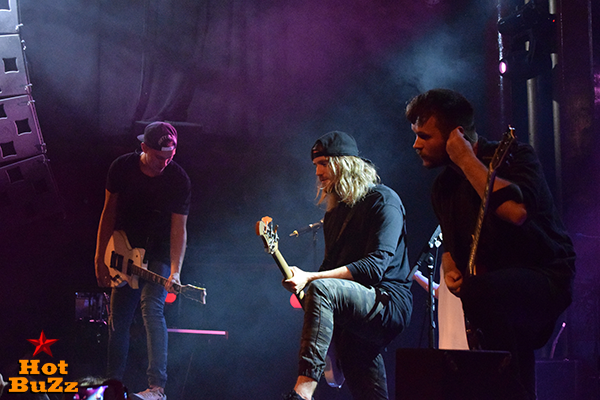 HB – Can you tell us a good, and bad thing about touring?

Cam: Definitely the bad thing about touring in the past was being the opening band, not having any money, not many fans, all that sort of stuff. Now it’s a whole other world.

Every tour we do now is different. Today we really had a good morning together on the bus, we explored the city, had nice and superb food, we met awesome fans. And we are going to hang out tonight, and play a beautiful show. The whole day’s been fun.

If you have a good attitude about your day, and always have fun…

HB: If you do what you love to do…

Jenna: Yeah! We enjoy other people’s company. It’s really nice to live together on the bus, being in bunk beds like little kids, and if you need your private time, you go and take time out, but we don’t want to do anything alone.

HB: You worked before with Mark Hoppus (Blink 182) and Benji Madden (Good Charlotte). How was your experience?

Jenna: I still don’t believe it. They are really important people to our lives. The music they wrote really affected us.

They are a very big influence, not only musically, but the way we grow up, and we experience high school, and the friendship that we came across, were connected because of these people, and the music they wrote.

It was really nice to hear them to talk about their lives, the way they experience this lifestyle, learn a little bit from them. You can’t ask for more.

HB: Would you do the same for someone who is starting out in the music industry?

Jenna: Of course, if I love it. I think we’ve learnt enough now that we can share, but I like to continue learning as well.

HB: Can you give some tips to bands who are starting out?

Jenna: I think it’s really important as a band to know your priorities, what is your intention. For a lot of bands, it seems that their priorities are, you know, networking, photos, and things like that, but what’s more important is the songwriting; to write songs that people are connected with, and put on a show that excites people.

The best thing you can do is it to learn to write a song, which takes a lot of practice. And start collaborating, don’t be afraid to ask for help.

Cam: You just only need to good friends because otherwise, doesn’t matter if you have great songs, eventually you would just break up anyway.

If you have great songs, and great friends, you get through together. 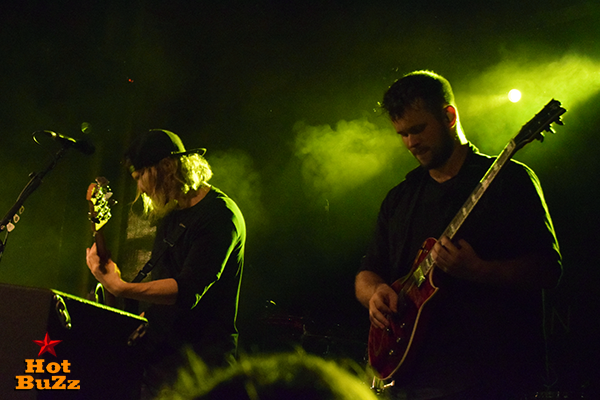 HB: What songs/albums are you really into at the moment?

Jenna: At the moment I’ve been in a routine with the Pandora Radio app, and I’ve just put the band Tycho in it, it does instrumental music. I really feel relaxed. They have beautiful guitars. And other artists who do instrumental electronic music like Eliot Lipp. I feel so peaceful. I enjoy that more than rock, and vocal music at the moment. It’s just what I need right now.

HB: Was their sound an influence for the new record?

Jenna: […] I really don’t know what directly influenced the sound of our music, but I think we were listening to Coldplay at that time.

HB: Cam, what is your favorite piece of equipment, and how would you define your style as a bass player?

Cam: I am not that much of a gear guy. I really love a great instrument with really nice strings. I use an Ernie Ball Stingray 5 bass. They are really good for rock songs, but they are equally just as good when you wanna play a mellower song.

I’m not fuzzy or overcomplicated. I know what I need to do for the song. It’s like you really wouldn’t notice is there, but if it wasn’t there, you would really notice. But the [bass in the] new record is more versatile.

Jenna: On the new record, Cameron and Matt (drummer) play really beautifully together. Cameron really stands out, he even has some melodic bass lines, I don’t think we ever had that before, and I think he is [now] expressing his voice. 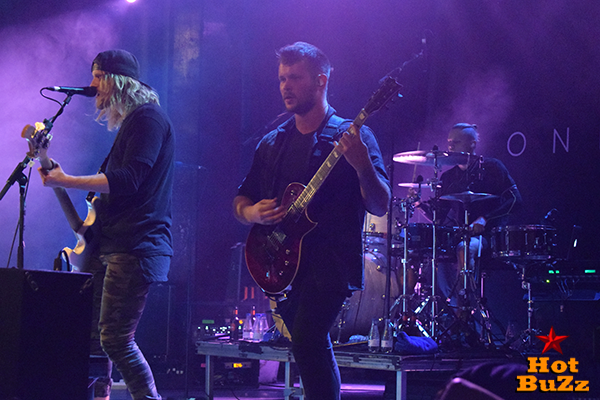 HB: We’ve heard that your are into healthy food, and you are really having a healthy lifestyle…

Jenna: Yes, Cameron is vegan, and I’ve just started to cut out dairies to have a completely pure diet.

We have barbecues, and we have our friends over Cameron’s house, and the boys cook food.

HB: Where do you see Tonight Alive in say 5 years time?

Jenna: I guess I wanna put out another record in that time, but I want to take a long time to write it, and record it. Any pressure at all. I wanna write music that is timeless, and really affects people, and their lives.

Tonight Alive are currently touring throughout Europe and the UK.

“Limitless” is out on March 4, 2016 via Sony Music Entertainment. Pre-order your copy here. 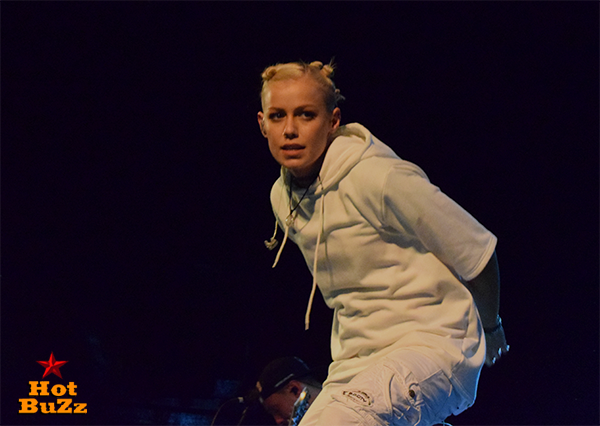 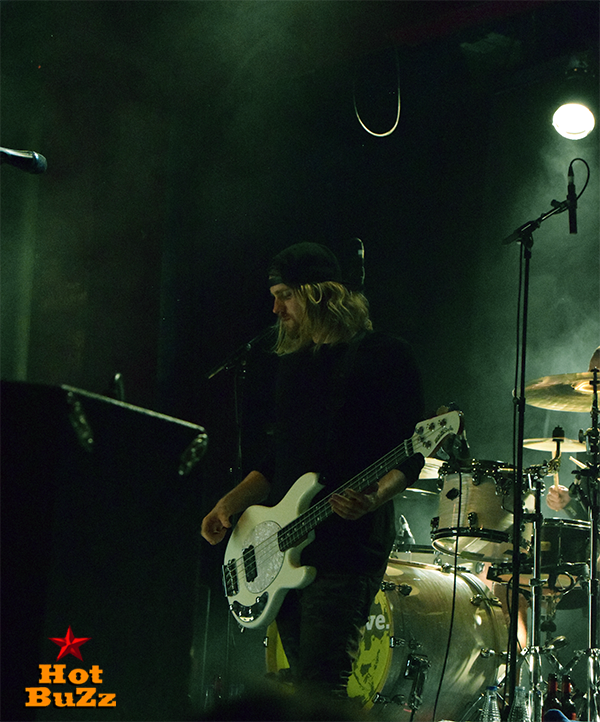 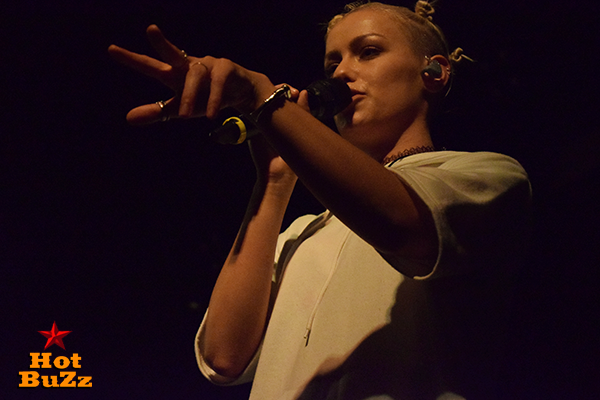 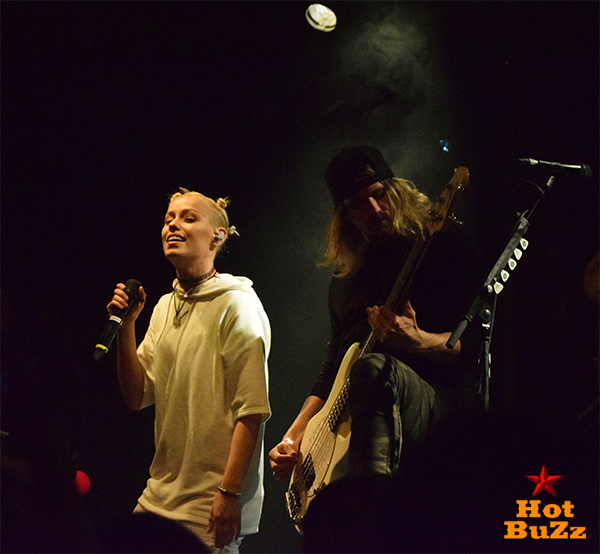 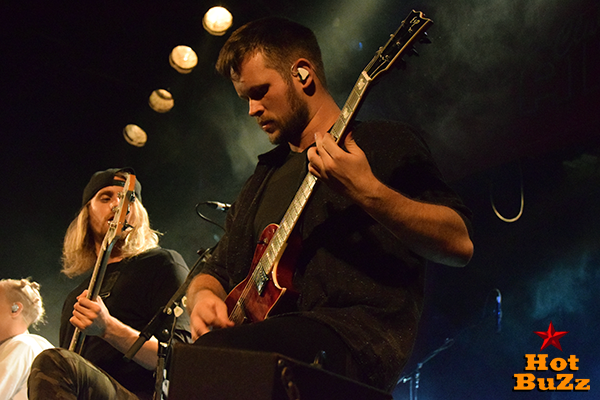 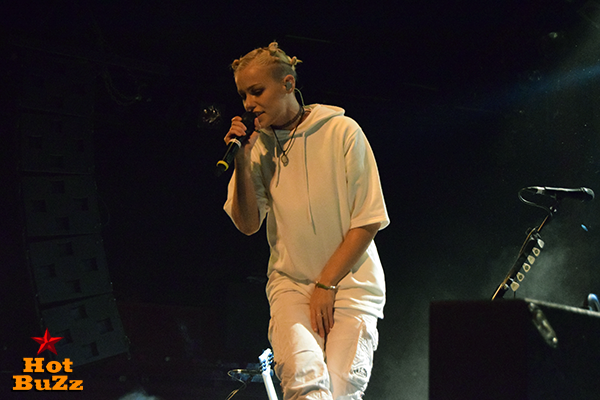 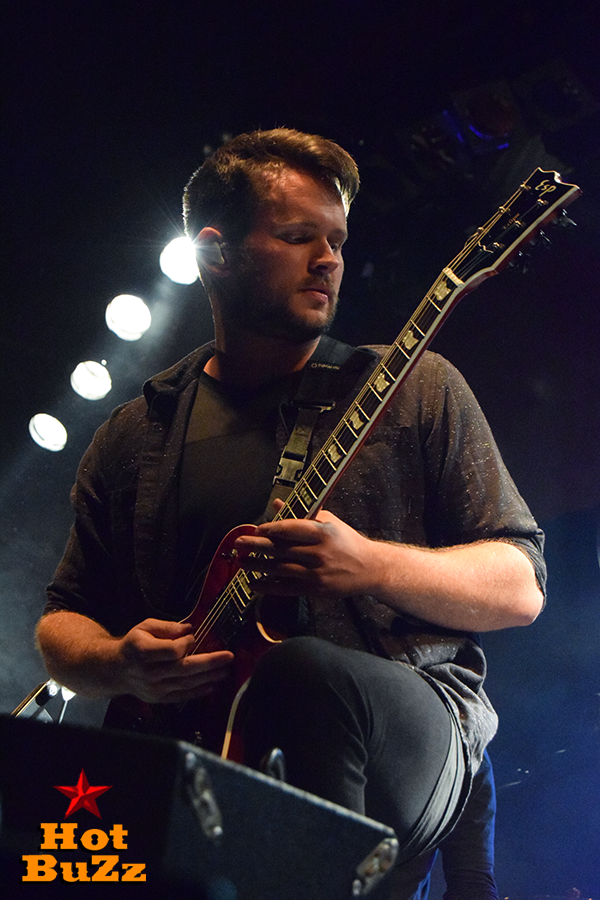 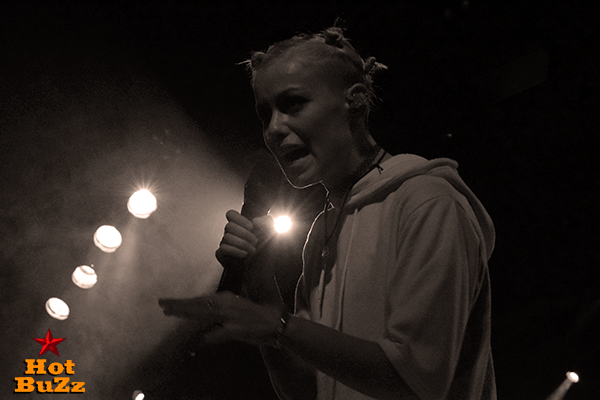 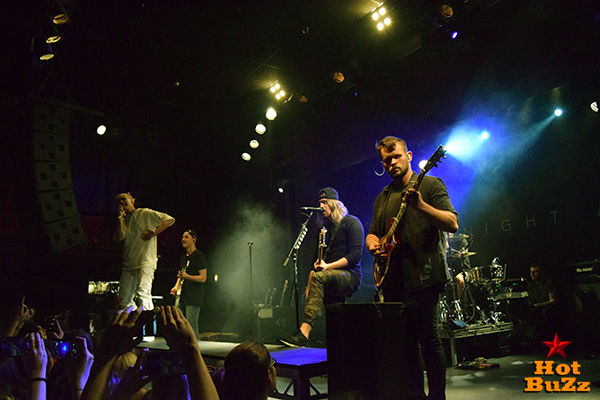 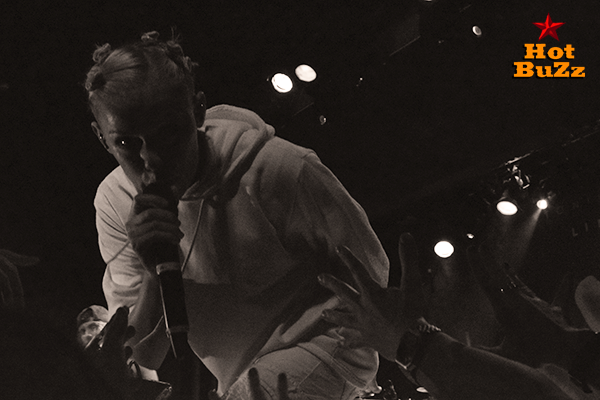