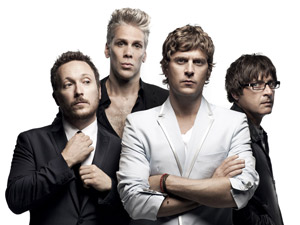 Florida quartet Matchbox Twenty are gearing up for two eagerly anticipated shows in London on September as part of the celebration of the release of their new album, “North”.

Currently lighting up the airwaves with their feverish new single She’s So Mean, Rob Thomas and Co., will head to the UK to play O2 Shepherd’s Bush Empire on September 18th, and hitting the stage the following day at the iTunes Festival at The Roundhouse.

The band will take the chance to perform for the first time the songs from the new record, which will be out on September 3rd on Atlantic Records.

The album, the first one in 10 years including new material, has been written by the band in collaboration with Grammy Award winning producer Matt Serletic, who has worked with artists such as Aerosmith, Santana or Willie Nelson, and it features tracks like Overjoyed and Put Your Hands Up.

Tickets are on sale priced at £25.00 and are available from www.livenation.co.uk or www.ticketmaster.co.uk.